A Tribute to Percy Parslow

I started keeping breeding hamsters on a small scale way back in the mid-1970s. In late 1976 I bought a tri-coloured and Dark Eared White, also a beautiful Golden. My brother and myself became interested in Syrian hamsters at the ages of 11 and 12½. We bred for a local pet shop in Holmfirth and bought a couple of books, 'Hamsters' by C F Snow and 'Hamsters' by Percy Parslow (1969 version). I became more interested than my brother Paul and finally gave up breeding/keeping hamsters in 1983.

Since then the hamsters in general have become huge, colours have somewhat changed e.g. cinnamons are now burnt orange, they used to be much better in the 1970s. Some hamsters seem more aggressive, screechy and downright temperamental. Since coming back and breeding, my thoughts are to try and breed only from good stock. Temperament of each hamster should be number one on your list as very tame hammys are worth their weight in gold rather than a huge fantastic coloured nasty hamster.

With many months and countless hours collecting and reading old books and new, my knowledge has increased and after finishing with hamsters in 1983, starting back again in 1998, I was a little rusty, but a 15-year gap has enabled me to look at hamsters in a different direction and try to understand them more positively as an adult rather than a teenager as I was then.

I have decided to write an article on a man, whom, as far as I am concerned, should never be forgotten, Percy Parslow. This guy set trends for other people to follow and did a lot of work for the Hamster Fancy. It is without doubt, although Percy is no longer with us, he deserves recognition and also remembrance in the Centenary 50 years of the National Hamster Council.

This article is dedicated to the memory of Percy W Parslow.

Percy Parslow was born in 1914 during World War I. He originated from Kingston upon Thames and suffered a very bitter childhood, which resulted in having no faith in people throughout his life. He had a jewellery business and was a salesman, but his great ambition was his love for animals. Eventually, he knew he would leave the jewellery business to pursue a career with animals. Whilst living at Kingston he originally started with songbirds, canaries and reptiles, gradually building up a stock of other rodents. His title ‘Lyndhurst Aviaries’ became his first business dealing with songbirds, canaries at Deacon Road, Kingston.

In 1954 Percy started 'The Southern Hamster Club'. He became the backbone of the Club, both financially and publicity-wise. He also did much dedicated work for the National Hamster Council. Throughout the 1950s Percy acquired more stock and wanted to produce more selective lines in this country. He achieved this by importing different types of hamsters, the Golden Piebald from the USA, the Dark Eared White from Milwaukee in the USA, the Golden White Band and the Cinnamon from the USA and in 1958 the White Bellied Golden, also from the USA. In 1960, whilst still living at Kingston, Percy produced the Sepia, the colour being a Tawny Beige -careful selective breeding from Goldens. This was the only coloured hamster produced at Kingston.

For a long time it was becoming a necessity to look for land so that he could expand and concentrate his hamsters on a larger scale. A 3½ acre site at Commonside was purchased in Bookham, Surrey. On 23rd October 1961 at Gt Bookham, Parslow's Hamster Farm was open. All animals from Kingston were transported and stock temporarily housed in the various outbuildings at Gt Bookham. It took eight months for the main outbuilding to be built, this 40ft long by 10ft wide building was the start of Parslow's Hamster Farm.

Several extensions were built on from the 40ft outbuilding to house various other animals. A 10ft by 20ft building for gerbils, rats and spiney mice, another building for cavies and rabbits being 12ft by 16ft but the hamstery was the main priority. Aviaries were made to house songbirds, canaries and parrots. He even kept donkeys.

The large main hamstery consisted of wooden racking systems to house the individual cages. There was a selling area and a special stock area for Percy's special breeding lines; no one knew what new varieties he was breeding. 3,000 hamsters were kept at any one time with roughly 250 bred each day, with customers far and wide. Many of Percy's hamsters were flown by air, reaching their new destination perfectly safe and in a healthy condition.

For people in this country Percy provided an excellent service via rail. Orders were received, hamsters selected to customers' orders and despatched carefully in travelling boxes to their destination. Customers then picked up their live animals at the train station as instructed. This service proved very reliable and was an ideal way to purchase hamsters from Percy if you couldn't travel to his hamster farm.

In 1962 Percy produced the Tortoiseshell White which he originally produced from one of his stock with yellow spots about the size of a pea. With careful nurturing and selective breeding, these spots increased in size to patches producing a Bi- or Tri- coloured animal.

In 1964 the Honey was produced and the original colour and standard set out was the colour of solidified honey. Somehow over the years Honey hamsters haven't looked like solidified honey and Percy did not agree to his standards being changed in any way at all. Percy was a very strong minded person and most certainly did not suffer fools gladly.

Percy Parslow became famous all over the world. His countless articles were printed and he regularly wrote for ‘Fur and Feather’ from the 1940s onwards. Percy Parslow wrote three books:

All these books are very rare and most collectable to the hamster fancier of today.

In 1979 Percy wrote a slightly revised edition of his book on hamsters with a completely different text format to the old Cassal edition. This 128 page book is still available today on

editor's note: the original link to [www.tfhpublications.com] is broken, as the original publisher (TFH publications) was taken over in 1997. Although Percy's books are out of print, you can pick up various editions on Amazon and eBay.

Its fifth edition has varied since its first edition in 1979 but still has the original colour plates photographed in the 1970s.

Nowadays all Percy Parslow's articles in newspapers are owned by the Daily Mail who own all the copyrights. Percy also sold all the copyrights on his books to publishers. In 1969 Percy Parslow appeared on a Blue Peter programme and he also appeared on Magpie in the early 1970s. These programmes are kept by the BBC and Thames Television and also copies are owned by Percy's daughter and son in law, Mr and Mrs Bailey.

Percy Parslow had a famous trading symbol, Greedy Guzzler Vitamins. These were liquid form vitamins which could simply be added to dry food. This product could be purchased alongside many other products ranging from cages of various types, food bowls, water bottle pots, ready mixed food, vegetable parchment cuttings, and lastly, but not least, the multitude of varieties of hamsters.

Originally, Percy kept his hamsters in wooden wire flip up top cages, dimensions 24” x 12” x 6”. He later changed over from wood to plastic, a more resilient material than wood. In the early 1970s he changed his housing from wood to orange washing up bowls. These bright coloured orange bowls were purchased in bulk from Woolworths, either at Epsom or Kingston. Each bowl was converted into a cage by a flip up wire mesh top held down by wire clips which locked under the edges of the washing up bowl lip. This method was practical, easy to clean, hygienic and suited Percy's personal methods of housing on wooden racking shelves.

Each home-made cage had an identifying card, with a number and colour written on it - this was Percy's system. If you are lucky enough to own a copy of ‘Your Hamster’ by Colourmaster Publications (eariy 1970s) you can see a glimpse on page 5 of ‘Percy Parslow's’ housing of orange washing up bowls’. The famous clock is pointing to 23 minutes past 5 and the various products of cages, books and bedding are situated in the sales area. Percy also produced all the colour photographs in this 32 page softback book, with a varied choice of new and old hamster colour varieties at that time.

Percy was a fair man with the right person, anyone who annoyed or disagreed with him or basically got his back up was usually shouted at and went home feeling rather miserable. To some people the name Percy Parslow brings a shudder, a vision of a man who was difficult, strong minded and down right temperamental. But to those who met him and treated him with respect, Percy would often reward with intriguing, interesting information. Numerous tales have unfortunately come to light since Percy Parslow passed away. In particular, I'm referring to what happened to the farm and his stock. Since talking and accurately recording as much as possible about Percy, Mr Bailey, his son in law, told me the truth about what really happened.

In early 1982 Percy Parslow's wife died of cancer and then Percy became ill with cancer also. Percy Parslow sadly passed away on 19th June 1983. Before Percy died he strongly wanted the farm to continue; various people were given a trial run to see if they were adaptable and suited to the job. Sadly no one showed sufficient enthusiasm and dedication to the job, often leaving after working only a short period. The business tried to keep going but the standards Percy was used to took a downhill slide. The animals were not looked after properly and cleaning out was not regular enough. In the end Percy couldn't find anyone he could trust to be able to continue his lifetime work and run the farm as it should be run.

Unfortunately, all old stock i.e. old breeding animals were put down by vets after Percy's death. Some younger stock was sold ridiculously cheap to people, visitors at the farm. Percy's instructions were that his special lines were to be humanely destroyed, a lifetime's work to die with him. Selfish this may seem to some, but details of genetics and all records were only kept in Percy's head and when Percy died all the information died with him.

The business continued to dwindle for six months after his death and the farm kept by his daughter Audrey Bailey and his son in law. The rest of the stock was to be distributed to dealers and various people whom he could trust. All that remains are the signs which are signposted 'This Way to Parslow's Hamster Farm', the large 40ft outbuilding, wire netting, a few various oddments and remnants, Percy's weighing scales and the farm minus its livestock.

Percy kept skins of all his special colour lines for reference and these have been preserved to this day. Sad it all might seem, but we do have memories of a very talented man who loved his animals more than human beings. Percy Parslow's name still lives on, people all over the world still post letters to Parslow's Hamster Farm at Commonside, Gr Bookham. Letters are received even now on a daily basis, some people think Percy is still alive today. Percy might no longer be with us, but he will never be forgotten.

God bless you Percy and all the hamsters you brought into the world.

I would like to thank various people for their help:
Mr and Mrs Bailey, Mrs Louise Wade, Chris Henwood, Jeannie Parlett, Zena Mawby and anyone else for snippets of information.

editor's note: The BHA are grateful to Andrew for agreeing to publication of this article in the Journal. It first appeared in the Summer Issue, July 1999.

The following scanned photograph of Percy from the Observer Newspaper December 1979 was sent to me by Chris Adams in August 2008. Thanks Chris ! 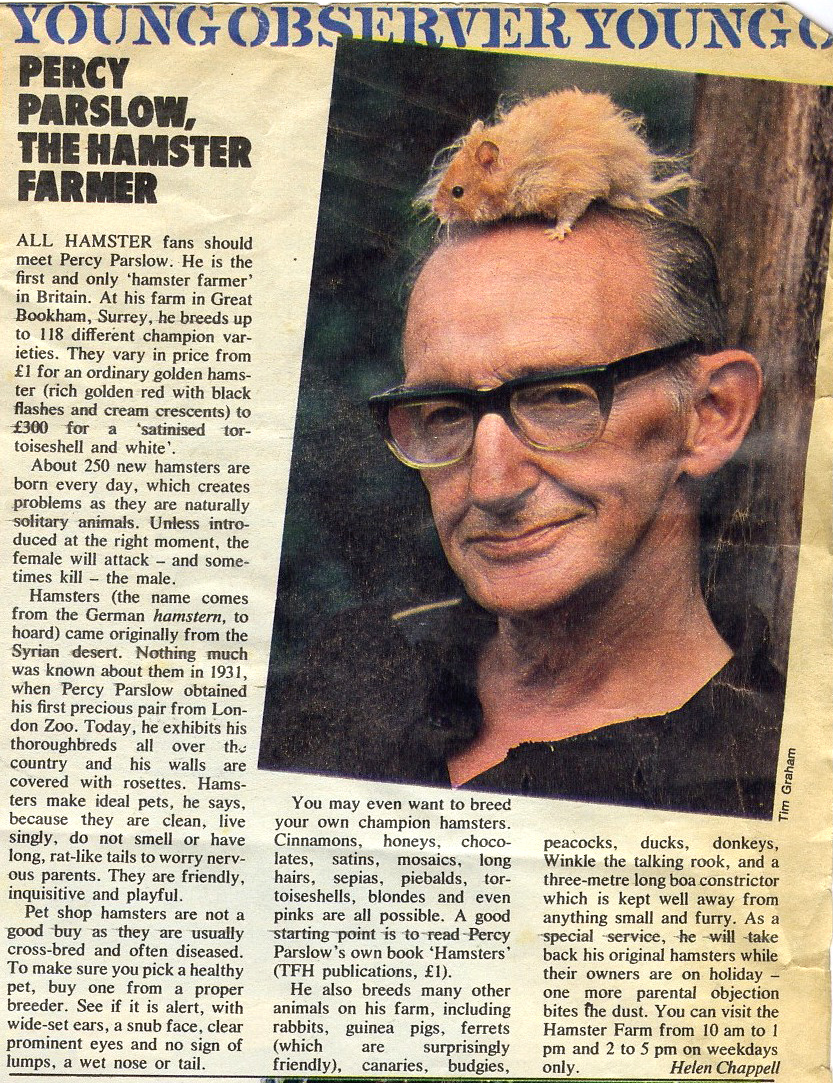