A few months ago we purchased a dwarf hamster who looked different. He was Pish Tush, and had a mainly white body with a grey "saddle" and grey cap. A document given to us from a breeder who had Internet access showed a similar animal with the label "Opal". 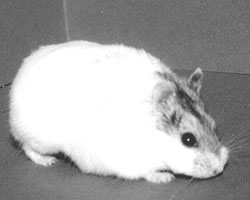 Pish Tush was meant to be a pet. We have to confess that he does not have good type, being long and lean with an open coat, slightly longer than was usual, but he has a magnificent temperament. We thought we would see what we got when we bred him. As his colour seemed to be more grey than brown, we gave him a platinum lady and called her Peep-Bo. In a few weeks she produced a litter that contained 3 Normals and 2 Grey Cap/Opals. We called them Katisha and Ko-ko (anyone who wonders about the names should see Gilbert & Sullivans' opera "The Mikado"). When the offspring were six weeks old they graduated to their own Hagen Duplex. In the next litter, Peep-Bo produced 2 Greys and 5 Cap/Opals, 4 of which were IDENTICAL females. The 3rd and 4th litters produced 1 Cap in 4, and 1 Cap in 5, respectively.

They were all delightful animals. We have not been nipped nor bitten by any of the Opals/Caps. One day I was rummaging in the sawdust to remove a salad dish and my fingers encountered a soft, furry, wriggly mass. There was Buttercup with a very new litter, but she merely looked up and licked my fingers. Even my precious Argentes would not have put up with that - usually I have to get them into a tube to lift them onto my hand. They will then walk peaceably onto an open hand. The reputation that Campbells have is due to a failure to respect their territorial nature. Now that we had 4 females, we set up 4 pairings (see table).

The fertility rate is low with small, infrequent litters. One female has developed diabetes and another has mammary tumours. The Caps have flat heads but curiously the Normal babies are beautiful with broad heads and good complete dorsal stripes.

For the present we are not setting up any breeding pairs of Grey Caps/Opals because:

If the gene is in the strain, what can we do other than stop breeding? The questions I have for the experts are:

editor's Note: in the text of Bill's article, he refers to "Browns" which I have taken to mean Normal Campbells, and amended each occurrence.